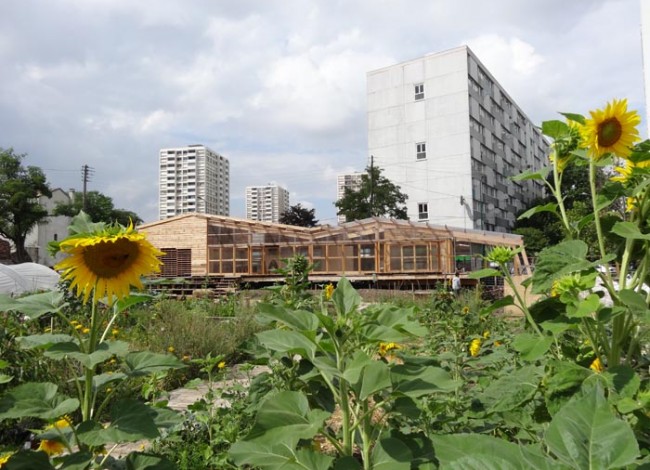 The project has been developed through a partnership between AAA (Atelier Architecture Autogérée) and the municipality of Colombes. Since 2008 AAA researched experimental strategies of ecological, economic and social change through interventions in existing urban social fabric, with a main focus on the inclusion of local citizen into collective practices. Later on, AAA proposed to Colombes municipality to experiment and develop some of the strategies; the municipality approved and became a partner. The project received funds from the EU Life + Programme of environmental governance, and some more from local and regional government. Furthermore, since the project gives great importance to the participation of local citizens, which can be considered developers too.

R-URBAN is conceived as a replicable strategy that promotes urban resilience through the creation of a network of citizen-run facilities that act as complementary units to reach a common objective: to connect chains of need and production in the most locally possible way. Each unit focuses on a particular field of activity, offer its space for bottom-up open educational practices, providing intellectual resources to citizen involved, functioning at the same time as an educational tool and an incubator, a catalyst of citizen-led activities.

The general objective of the project is to create a replicable urban strategy aimed at solving and responding to the current environmental global crisis from a local level, producing locally, as far as possible, what the city needs (es. food & energy) and recycling what the city dismiss (bio waste & hard materials).

So far the facilities created in Colombes are: AgroCité and RecycLab, that were opened in 2014, and more are being developed and exported in other areas of Paris as well as in other cities.

AgroCité focuses around an ecological urban agriculture and consists of a micro-experimental farm, some community gardens where citizens can grow their own food; composting and rainwater recycling, educational and cultural spaces, as well as devices for energy production. The process of cultivating the land and the programs not only creates more local resources, local production, job opportunities, but also enhances the sense of ownership and social capital for a community of resilience.

RecyLab is meant to use creative ways and thinking to repurpose objects that would normally be thrown away, through workshops, local events, and a lab for advanced technology, in which scrap material is transformed into ecologic building material.

A set of rules and guidelines has been collected in a chart, that will be useful for current members -which are supposed to be respect them- and to eventual new units of R-urban. The members are organised in an association, the facilities are open during the events and the workshops. The units cooperate with many realities in its vicinities to carry out the activities and to export its products.

Colombes is located in the outskirts of Paris, and suffers of a high unemployment rate, but its citizens are very active and prone to participate to communal activities, a fact that is testified by the many non-profit organisations operating in the area.

R-urban wouldn’t be possible without the willingness of local people to participate, and the presence of semi-unused areas that permit the development of urban/rural activities. Indeed, the innovative character of the project made it succeed to gain sufficient investment and funds for its development.

Two facilities are active in Colombes, a third one is supposed to be in construction. A mobile unit was developed in the Hackney-Wick neighbourhood of London, and the strategy is in progress to be exported in other cities too.

Local population is benefitting from the initiative increasing its social and cultural capital through a renewed community sense and chains of trust, and new knowledge is shared. Moreover their work is having an impact on the ecologic and environmental performance of the city too: the emission of many tonnes of CO2 is avoided each year, clean energy is produced, food is locally harvested.

The project is on-going, the results expected are met and it is slowly spreading to different urban realities.

R-urban won several international prizes, that recognised it as a good and successful practice of promotion of urban ecology and resilience through educational practices and community bottom-up action.