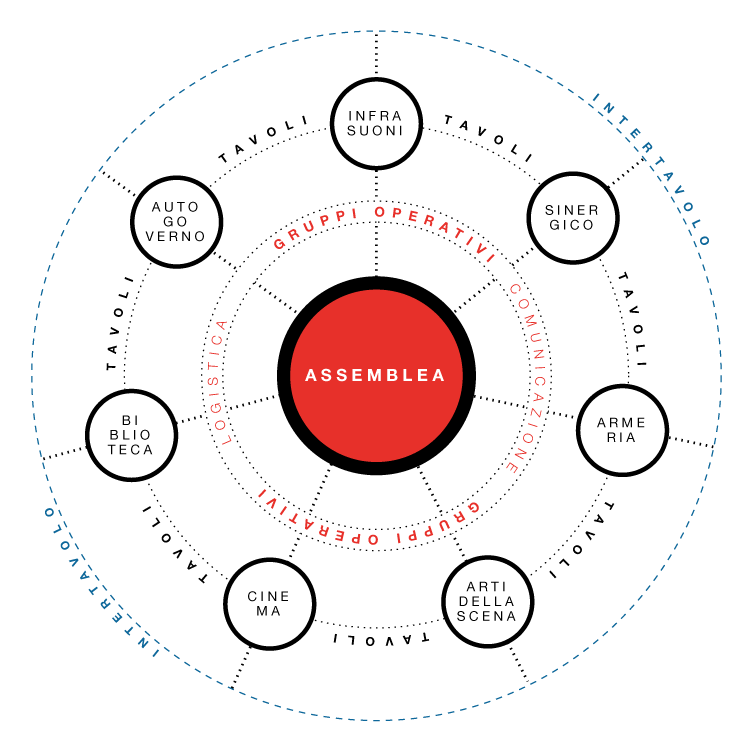 The project is developed by an open community of artists, creative people and activists. Their activity is centred in an ex-monastery in central Naples.

The Asilo (The shelter) is a centre for independent art production and sharing, controlled and managed directly by an informal open community. The OEP in found both in the art/cultural world participation as productors or spectators, both in the experience of direct democracy and space managing for those that get involved into it.

The project was first seeking to avoid the closure in 2011 of a recently renovated cultural center, since the economical condition of the city government couldn’t afford to keep it open anymore. As a protest, a community of artists installed a democratic and open management in it, in order to promote public art, music, theatre, literature and cinema.

The centre activity expanded rapidly, attracting more artists and more audience, proving at the same time to be a sustainable experiment of direct democracy.

In 2014 the city government eventually acknowledged the practical benefits, the positives effects and new vitality that such management was providing to the city, and decided to legally recognise the activity of the citizen communities involved, granting them the right of use of the buildings, and starting a new paradigm of low-cost and citizen-led urban management.

The center relies on a system of internal democracy built and perfected along the years, which access is open and free, but related to the effective participation to the center’s activities.

The center offers free art-production spaces on a project basis, as well as it works as an open access exposition space for music, teather and cinema, visual arts.

It makes available a wide array of classes and cultural experiences to the citizens for free or behind a small offer, despite not receiving direct funding from the government.

The Asilo experience plays a major role in a process that the city administration has undertaken, aimed at creating a framework for the identification, management and protection of “urban commons”. A “common” occurs when the access, use and management of a resource is shared by member of a certain community, that carry out a process of commoning.

The concept behind Naples urban commons is: if such buildings are “public property” then it means that citizens have the right of use them and deciding about their future, if the city council cannot provide better arrangements or is not able to avoid their closure because of economic difficulties.

The urban space is used an exchange unit: at the Asilo artists are given space to work and do rehearsals for free, but in turn they offer to the city free access to their art products and any educational/cultural experiences that is taking place in the center.

Many aspects of the experience are considerable to bring benefices: first, city artists and cultural producers have a space where they can develop and work without being influenced or limited by market needs and restrictions. Second, the general city population, the city users or tourists are beneficiating by their usual or occasional participation to the center’s events. Third, the city administration found a way to resolve conflicts and negative situations due to its financial difficulties, giving at the same time the citizen a concrete opportunity to engage in direct democracy experiences.

The city cultural life got richer, the local art production increased, citizen engagement into cultural activities got deeper, an old building has been turned into an alive social space, an experiment of citizen direct control has reached stability and general consensus.

The Asilo experience is evaluated as a very forward-looking example of trust between administration and citizenry, and successful bottom up social development experience, since a citizen-led solution has been found in a quite complex legal-economic situation.