It arises in 2015 from a group of students from the Social Education degree of the University of Barcelona. During the course of the degree, we found that at the university we cannot put into practice many of the socio-educational ap- proaches that we are discovering. During the third year of the degree we le- arned about a competition in Sant Boi de Llobregat, in which, as its name suggests, empty or disused spaces in the city are offered for the development of projects. One of these spaces is a closed newsstand located in the Plaça de la Generalitat in Sant Boi de Llobregat. We wanted to explore social edu- cation in public spaces, that is, in open spaces. We were interested in public space as a space for socio-educational action, relationship and experimenta- tion.

We applied for this competition and, after a few months, we were able to ob- tain the municipal cession of this space in the centre of the square.

We came to a place and none of us were from the territory. Therefore, we were unaware of the dynamics of the environment. In the beginning, what we did was to build our own offer of activities from the space of the Kiosk. In this way, we have met many people: children, young people and adults who have given us clues to define the activities. Let’s remember that we don’t normally have a stable work group; groups are created at a certain time and when the activity is over they disappear. This is, in part, an advantage and, at the same time, it has been a technical and organizational difficulty that we have learned to solve with experience. One of the ways to solve it, a kind of network or structure that agglutinates the people who usually participate in the activities or are punctual collaborators or are interested in supporting it in certain mo- ments.

From our perspective as social educators, we consider that working from community action means looking beyond your proposal and activity. Thus, we began to participate in different community spaces that already existed in the neighborhood. In this way, we started to become familiar to the neigh- bours of the square and to the technical referents of the Town Hall and other entities. In this way, we became part of the social network of the territory and we collected, from different sources, ideas, ways of doing things, sug- gestions, needs, etc. To do this, we have invited people from the territory who had proposals and we have taken them to the Kiosk or we have opened the space for other entities in the territory to do activities. Finally, another key element of the way of working is to cooperate with other entities that have shared interests and jointly think of projects that put education, culture and public space into play.

There is a willingness to take advantage of and enhance the public space understood as an educational and social medium. As a team, we are moved to open closed or repetitive circuits to generate new relationships and new cultural events accessible to all. When we generate an activity in the public space, we change the relationship with the environment and that gives mea- ning to the initiative. Thus, we consider that by making the kiosk available to the neighbors we can contribute to the exercise of the right to use and parti- cipate in the city, in this case, the nearest square. The space belongs to everyone and, therefore, different people with different wills or interests coe- xist. Considering this, our objective is to coexist with these interests and sub- jectivities from the respect to the diversity of uses. Everyone must find their own space and also everyone is free to walk in the company of whomever they wish.

We have always tried to work towards offering diverse cultural content. For example, we have created the Kiosk story and spaces for collective rea- ding of stories, we have made story exchanges and invited illustrators from the territory or we have made story telling sessions, etc. But we have also explored other activities to build memory of the square, through the radio, with young people from the neighbourhood. In the summer, we start the film sessions at the Kiosk for all audiences, where we have prio- ritized the projection of audiovisual products of which we could invite the di- rection or production team to do the colloquium.

Assessing the impact is difficult. We can say that, since we started, we have not stopped receiving proposals and collaborations with various agents in the neighbourhood. We can also say that children and their families repeat activi- ties and participate more and more. In addition, we have contributed to widen the range of activities offered by the neighbourhood in that square. That is, we have given more uses. Bearing in mind that many neighbours have had a negative perception of this square for years, we want to believe that the pro- ject and all the people who have participated have contributed to changing this perception, because in recent years there have been several people, both from the associative network and from the neighbours, who have bet on the square. So, our challenge is to keep on moving and with more and more people! 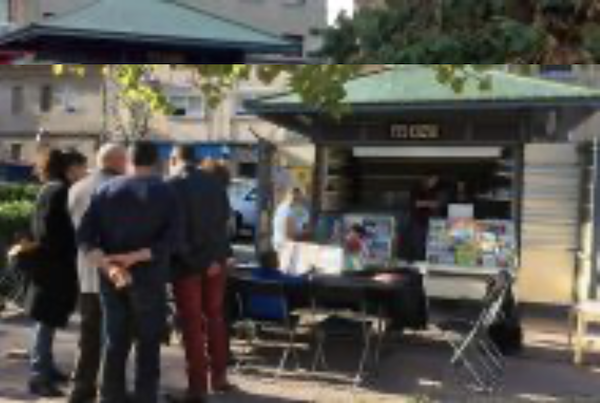