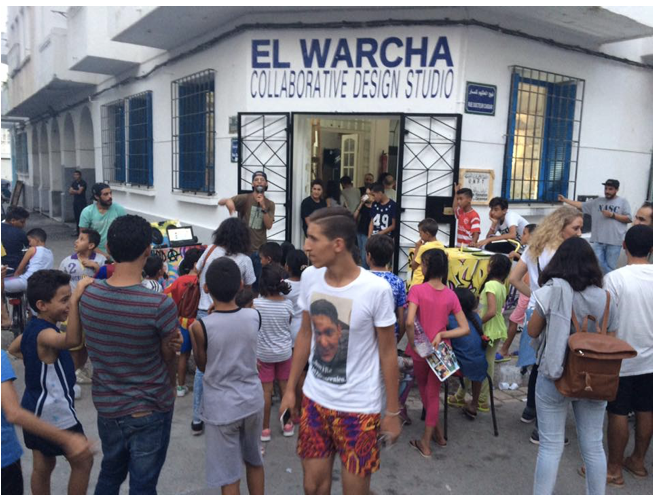 El Warcha was first established in 2016 as part of an artist residency with l’Art Rue, a grass root and activist art organisation in Tunis promoting pubic art and engagement base practices. Designed initially by Benjamin Perrot as a temporary community workshop space, with a particular focus on public art and design workshop for children the project evolved over the years and took a life of its own. It is now under the supervision of two project manager and employs two full time and around seven people on a part time basis. In 2018 former project managers in Tunis Justin and Benjamin opened two new workshops, one in London and one in Davis California.

El Warcha is a workshop is deeply rooted in its neighbourhood Hafsia, in the medina of Tunis. From the outside it looks like a regular carpenters workshop as you can find many in the streets of Tunis. It is open everyday and free for anyone to access. It runs weekly activities with young people and adults with a particular focus on design, woodworking and carpentry. Part of our activity revolves around participatory public art interventions, with a particular interest in functional elements. El warcha often collaborates with other organisation around Tunisia and abroad; in 2018 we were invited to take part in a street art festival in Ghana. Our weekly projects also include varied orders by local neighbours: a cradle, a coffin for a cat, a sukkah, a 6m long boat and many tables, chairs and shelving units. The project operates with one workshop manager and one administrator, however decisions are made collectively in a non-hierarchical way. The team is composed of young people from the neighbourhood, design students, artists and architects.

El Warcha is a collaborative design workshop. It aims to promote alternative forms of education and civic actions through the making of urban furniture and art installations. The idea of learning by making is central to this practice and all the activities revolve around live projects. As part of our work we also develop projects for clients working with a team of unemployed young people from the neighbourhood. In the last two years the project has evolved internationally with now one workshop in Tottenham north London and one in Davis California.

The Project is situated in Tunisia north africa, it started in 2016, five years after the revolution. The workshop is situated in the median of tunis, a Unesco world heritage site dating back from the 8th century. More specifically the workshop is deeply rooted in its neighbourhood, Hafisa is a historically poor part of medina, aslo known for being the jewish quarter of the medina. Over the last four years the medina has gained more and more interest form artist and cultural organisation, however it is still a relatively poor part of Tunis far from being gentrified.

El Warcha started in 2016 as a temporary art residency, it is now employing between 6-10 people monthly. The project has also gained wider recognition and is often taking part in collaboration in Tunisia and aboard. The latest development is the opening of two workshops abroad, one in London and one in Davis California.

The aim for this project was to gain its own autonomy, which has been achived in terms of management, it is now under its third management team. Financially the workshop is still